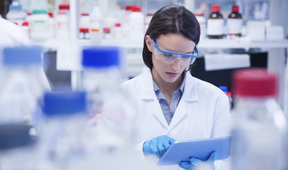 Over the past few decades women have made significant progress in the sciences, and today there are more women in science than ever before. Furthermore there is no denying that women have made a large impact in the scientific community, and continue to do so. Indeed some of the most famous scientists to have ever lived, including the noel prize-winning Marie Curie, were women.

However the unfortunate fact remains that there is still much progress to be made for women in science. Indeed a number of scientific fields continue to be dominated by men, though there are some exceptions such as molecular biology where the male to female ratio is more equal.

Furthermore there is also some evidence that women employed in science-based careers may receive fewer promotions and be paid less than their male counterparts. For example according to a recent report there are far fewer women than men working as professors in the natural sciences.

A recent study conducted at Yale University also revealed further worrying evidence of a gender gap in the sciences. Indeed the results of the study suggested that physicists, chemists and biologists are likely to view a young male scientist more favourably than a woman with the same qualification, providing evidence of a continued bias against women in science.

The problem is also seemingly evident within school populations as well. For example according to an article in the Guardian despite continued efforts to encourage female students, almost half of Britain’s co-ed schools have no female students taking A-level physics.

However it should be noted that steps are being taken to tackle the gender gap in the sciences. For example a number of initiatives and organisations such as WISE are helping to inspire women to pursue careers in the sciences and are making significant progress. For more information about inspirational women scientists take a look at this handy guide.

Here at Edulab we understand the important role women play in the sciences and are passionate about equal opportunities. We are suppliers of an amazing selection of laboratory supplies which we hope will inspire men and women alike to discover the wonders of science. For more information about our range of products and services please do not hesitate to contact us and one our friendly team will be happy to help you with your enquiries.