Van De Graaff Generator – How Does It Work? 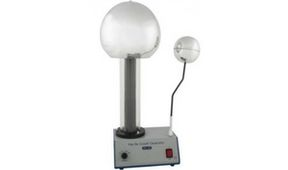 While many of us may not recognise the name, most will undoubtedly have seen its hair-raising effects. The Van de Graaff generator was invented by the American physicist Robert Jemison Van de Graaff in 1931 to create static electricity and make it available for experimentation.

Whether you’ve ever received a shock when touching something metal or have placed your hand on a Van de Graaff generator to enjoy the sensationally spiky effect it has on your hair, in one way or another, intentionally or otherwise, you’ll have experienced the enigma that is static electricity.

To understand the Van de Graaf generator and how it works, it’s essential to get to grips with the concept of static electricity.

From a sudden spark between two people to science experiments in the classroom, static charge can be seen, felt and heard.

To comprehend what’s happening when your body or an object develops a static charge, it’s crucial to consider atoms. All matter is made up of atoms, which are themselves a collection of charged particles. In the middle of each atom is a nucleus, which contains two types of tiny particles, called protons and neutrons. Orbiting around the nucleus are smaller particles called electrons.

An atom that loses electrons will have more positive charges provided by its protons, whereas an atom that gains more electrons, will become negatively charged. Some materials keep tight control over their electrons and are known as insulators. Those that don’t are better known as conductors.

A common way to move electrons from one place to another is to rub two objects together. This increases the contact area between them and allows electrons the opportunity to be transferred. The more rubbing, the more electrons move and the greater the build-up of static charge. Static electricity is the imbalance of positive and negative charges.

When contemplating the laws of physics, the old adage of opposites attract is certainly true. Two objects with opposite charges will attract, whereas, two objects with the same charge will repel each other.

When you take off your woolly hat, it rubs against your hair, moving negative electrons from your hair to the hat. A static charge builds up, rendering each strand positively charged. Each strand has the same charge and repels against the other. The furthest the hair strand can get is to stand up and away from every other one until the lost electrons slowly leak back. 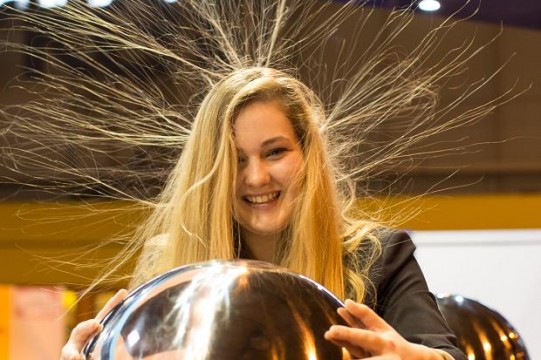 One way to provide useful insights into the world of electrical phenomena is via a Van de Graaf generator. The generator produces and stores electrical volts of the same charge to create static electricity. Big rubber bands move over a piece of felt, stripping away its electrons. The electrons move up the rubber band to the metal ball and into the person whose hand is placed on the generator as part of the experiment. Standing on an insulating surface protects the participant from shock, as the charge cannot go through the body and get to the ground. Full of repelling electrons, trying to get as far away from each other as possible, the participant’s statically charged hair provides a personification of this electrical phenomenon.

While there are myriad experiments that can be performed with a Van de Graaff generator, the hair-raising demonstration proves perennially popular in the classroom. Contact Edulab today for a range of electrifying scientific teaching equipment.