Unchartered Territory: The Rise of the Volcanic Island 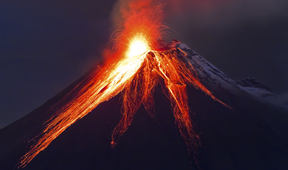 A new volcanic island has formed in the South Pacific Ocean, following the dramatic eruption of an underwater volcano. And last week saw the first photographs of this incredible landmass emerge, after three intrepid explorers scaled its peak to photograph this new, unchartered territory.

The group are believed to be the first people to have set foot upon the island shores. There they were treated to beautiful views of the volcano and its vast green lake, which, luckily for us, they were able to capture of film.

Remarkably, these brave individuals commented that the island still felt warm to the touch, which is perhaps to be expected, given its volcanic origins.

Where Did It Come From?

Signs of the island first appeared back in January, after the ash produced by the eruption of an underwater volcano began accumulating. Within a few days of the eruption, satellite images revealed that a series of new rock formations had already begun to emerge, and that a new island was in the making.

The island, which is Earth’s newest landmass, is now believed to be around 1.1 miles in length and rises an impressive 100 meters above the sea.

Best Admired From a Distance

Admire it while you can – according to scientists, the unnamed island will soon be reclaimed by the sea in a matter of weeks.

That said, don’t go booking your tickets just yet. Whilst the island might look like an exotic paradise, experts believe that it’s likely to be highly unstable and dangerous to those who venture upon its shores. This beautiful but deadly island is probably best admired from a distance, and you can view the spectacular images of this newly discovered island here.

One of a Kind?

We tend to view the earth beneath our feet as permanent. However, it might surprise you learn that the appearance of this mysterious island is far from a one off occurrence. In fact, the formation of new landmasses following volcanic eruptions is actually relatively common and this new island is by no means the only one of its kind.

Back in 2013 a volcanic island dubbed Nii-jima appeared off the coast of Japan and to this day continues to expand in size due to continued volcanic eruptions. Coincidentally, this island is also rather famous for bearing more than a passing resemblance to the much-loved cartoon character Snoopy.

Stories such as this demonstrate the incredible, dynamic, nature of our Earth’s geology.

Here at Edu-lab we’re passionate about all things science. That’s why we’re a leading supplier of everything from geology equipment to laboratory glassware. For more information about our fantastic selection of products contact us today by giving us a call on 01366 385777.