This Day In Science History 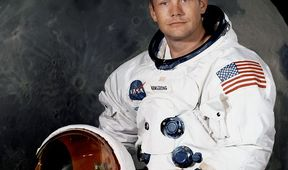 86 years ago today, American astronaut, Neil Armstrong was born, on 5th August, 1930, making history by being the first person to walk on the moon. Few individuals have managed to both physically and metaphorically leave such a lasting imprint on human history, however, this renowned scientist’s name continues to resound and inspire.

Flourishing in science and mathematics, Armstrong was obsessed with aeronautics, gaining his pilot’s license before he could legally drive a car. From aeronautical engineer to test pilot, Armstrong’s expertise put him in a prime position for successful NASA astronaut selection. After several aerospace assignments and training for a lunar landing, Armstrong was appointed the commander of Apollo 11.

A worldwide TV audience of 500 million tuned in to hear Armstrong utter the immortal words, “that’s one small step for man; one giant leap for mankind.” A little over 21 hours after the historic landing, the crew prepared to re-enter the Earth’s atmosphere. Their return to Earth was met with a new-found fame, which for the most part Armstrong attempted to avoid.

He continued to act as a professional ambassador for the space programme and sought the relative anonymity of an academic life, working as a professor of aerospace engineering at the University of Cincinnati.

Space exploration intrigues and engages children’s interest. The recent excitement surrounding interaction between school children and the British astronaut, Major Tim Peake on the International Space Station is a testament to this continued curiosity. With stimulating science projects, children can channel their enthusiasm into exciting hands-on astronomy activities.

The moon’s surface is a sight to inspire. A simple experiment can allow students of all ages to make hypotheses about the formation of its craters. From a marble to an orange, drop various sized spherical objects into a surface of flour to explore the relationship between the size of a meteorite and the resulting crater. A raised relief map will further represent the moon’s terrain and allow children to explore its topography from afar.

Similarly, interactive whiteboards allow the teaching of a range of astronomy subject matter using visually stimulating material. With drag and drop interaction, animation and simulation, children can learn about the solar system via a virtual whiteboard science lesson.

Why not reinforce a virtual science lesson with the help of a physical astronomy model? An Orbiter manually demonstrates how the Sun, Earth and Moon revolve around one another. This gear-driven model can enhance children’s scientific understanding of the concepts of daylight, night, the seasons and phases of the moon.

Many children will gaze in wonder at the night sky and contemplate the mysteries of the cosmos. Today, the birth of Neil Armstrong reminds us of the huge effort that made manned space exploration possible. Having forged that frontier, let’s hope Armstrong’s legacy will inspire a new generation with the same spirit.

Contact Edulab today for everything you need to inspire your emerging space explorers of the future.