The Science of the Supermoon Lunar Eclipse 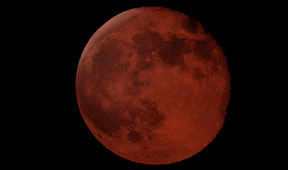 Early this morning, if you were awake particularly early, you may have seen a rather rare event in the night sky; a supermoon lunar eclipse, sometimes known as a Blood Moon.

The eclipse was completely visible from the UK, with clear weather in many areas offering a fantastic view. Beginning at approximately 02:07 am, the penumbral eclipse began and lasted until 05:27. The full eclipse phase lasted from 03:11 to 04:23, and the moment of totality was at 03:47.

This particular event was the result of a confluence of three things; a full moon, a supermoon, and a total lunar eclipse. The last time this happened was in 1982, and if you missed it you’ll need to wait until 2033 for these three things to happen at the same time again. Astronomical phenomena such as this are always fascinating events, and great opportunities for scientific observation at all levels because you don’t need any complicated laboratory equipment to watch them.

The moon does not give off its own light; what we see in the night sky is the reflection of the sun’s light on the moon. Like the earth, the moon is only ever lit on one side, and as it orbits the earth the amount of the lit side that we see changes – this creates the lunar cycle. Last night, the sunlit side of the moon was completely facing the earth, which makes it a full moon.

This morning, the moon was at its perigee, and as it is closer to the earth it appears to be larger than usual; hence the name “supermoon”.

The moon orbits the earth, and the earth orbits the sun. When these orbits line up so that the earth lies directly between the moon and the sun, the light from the sun is unable to directly reach the moon – it lies in the earth’s shadow, and is thus eclipsed.

The same can happen in reverse, when the moon lies between the earth and the sun and creates a solar eclipse. The most noticeable difference is that, during a solar eclipse, the sun is completely blacked out, leaving only the fiery ring of the corona around the outside.

During a lunar eclipse, however, you will still be able to see the moon; it will still be in the sky, but it will have a reddish glow instead of the white we’re used to.

This is due to a phenomenon called Rayleigh scattering. Light is made up of a full rainbow of colours; those at the beginning (red, orange) have longer wavelengths than those at the end (indigo, violet).

At Edulab, we have a great range of astronomy equipment to help you understand and explain events like the lunar eclipse; for more information, get in touch with us on 01366 385777 today.