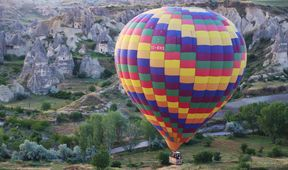 Charles’ Law is an experimental gas law that describes how gases tend to expand when heated.

The law states that if a quantity of gas is held at a constant pressure, there is a direct relationship between its volume and the temperature, as measured in degrees Kelvin.

Think of it this way. As the temperature increases, the molecules within any given gas begin to move around more quickly. As the molecules move faster, they collide with each other and the walls of their container more frequently and with more force. If the gas container is inflexible, these more frequent and forceful collisions will result in increased pressure. However, if the container is flexible, like a balloon, the pressure will remain the same, while allowing the volume of the gas to increase.

Charles’ Law apparatus can be used to demonstrate this thermal expansion of gases. While a classroom experiment will prove the formal theory, there are numerous examples of the law in action in everyday life, which can help to embed students’ understanding.

Make sense of the science by considering some of these real life applications of Charles’ Law.

Watch what happens to a helium balloon on a cold day.

Step outside with a helium balloon on a chilly day and chances are, the balloon will crumble. Once you get back into the warm, however, the balloon will return to its original shape. In accordance with Charles’ Law, this is because, a gas, in this case, helium, takes up more space when it is warm.

How about a hot air balloon?

Try out a turkey timer.

Pump up your ping pong ball.

If you play ping pong, chances are you’ve come across the occasionally dented ball. Restore its roundness by popping it in a pan of water. Warm the water gently while stirring and the air inside the ball will expand as it heats up. The expanding air will push out the dent and restore the ball’s roundness.

Take a look at your tyre pressure.

Take a tip from your manual and measure the pressure of your car’s tyres when they are cold. Driving heats up the tyres and consequently causes the air within them to expand. As such, if you measure the air when the tyres are warm, the pressure will be higher. You can double-check that you haven’t overfilled your tyres by checking them when they’ve cooled down.

For a wide range of lab equipment and supplies to help make sense of the laws of science, contact Edulab’s friendly team today.