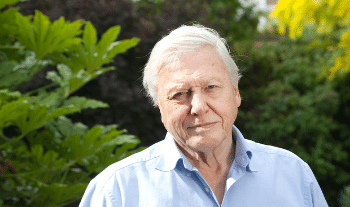 You’d be very hard pressed to find a 93 year-old who knows what Instagram is, let alone join it. But that’s exactly what Sir David Attenborough did the other week. Not only that, he also went into the Guinness Book of Records as the quickest to reach 1 million followers, in a mere 4 hours and 44 minutes, which completely blew Jenifer Aniston’s Friends reunion photo sign up out of the water.

Even since then, it’s quintupled!

David Attenborough has spent a lifetime travelling, exploring the wild places of our planet and documenting the living world in all its variety and wonder. He’s also witnessed the damaged caused. Saving our planet is now a communications challenge. We know what to do, we just need the will. That’s why we want to share this message on Instagram. Because there is hope and together, we can inspire change. Social media isn’t David’s usual habitat so while he’s recorded messages solely for Instagram, like the one in this post, we’re helping to run this account. In case you’re wondering, ‘we’ are Jonnie and Colin and we worked with David on A Life On Our Planet. So, as well as sharing the messages he’s recorded especially for this account we’ll also post some exclusive clips and behind the scenes content. Stay tuned.

Why would he do this? What’s the point? Well, to put it simply, he’s trying to help save the planet. Sir David is looking to use the platform to inform, educate and get as many people as possible to take the environmental crises we’re seeing today, seriously and share potential solutions.

Even this month, the UN’s General Assembly is meeting to discuss (and hopefully act on) the emphasis to safeguard nature and biodiversity.

What is biodiversity and why are we just doing something about it now?

Biodiversity concerns all living things on Earth and how they interconnect with each other. It’s the most complex and the most vital feature of our planet. From genes, species and creature communities to their entire ecosystems like forests and coral reefs. Impacting one thing will have an effect on another.

If we don’t act now it will be too late to save the planet!

How can we make things better?

Altering the current course will demand some big changes, in both mindset and our lifestyles. Countries, governments, companies and people alike. Everyone can do more. From making products sustainably to recycling more and consuming less meat. Everything plays a role.

In fact, there are some amazing initiatives that have already started. Just look at this initiative in Costa Rica, where they are looking to combat the offset of deforestation in the Amazon rainforest by doubling its forest cover from an innovative carbon tax.

Allowing nature to have the freedom and security it needs to flourish is the only answer, as nothing else in the world is having a more negative affect on this than human activity. Once a species gets displaced or goes extinct that’s it, there’s no going back, and it will have an effect on the entire ecosystem.

Educate as early and as quickly as possible

If you think about Sir David’s move to join Instagram, who is the most likely target audience? Young people. They are key to what will happen over the next 10, 20, 30 years. The more we can make the younger generation aware of the impact the current world’s workings are having on the planet, hopefully it will lead to more positive action.

Whether you’re teaching photosynthesis, showing students what living organisms look like in soil samples or how a better diet and fitness can affect their bodies throughout their lives when it comes to diseases and immunity, the more we can engage and keep them interested, it will empower them to want to make a difference and join the fight to preserve what we have.

There are so many things that can be done, small and big. It’s just about changing mindsets and routines. We can do this, together!

Edulab has a new home!

You can now find the Edulab range and much more on VITTA Education & VITTA Scientific.

Existing customers please check your inbox for an invitation to set up your new account on either VITTA Education or VITTA Scientific. After logging into your new account you will be able to see your order history and download your invoices as normal through your account area.

If you have any trouble getting set up please get in touch with your account manager.

Customers in the education sector please go to:

All other customers please go to: