An Introduction To Dissection 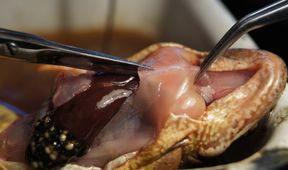 Dissection has been used for centuries to explore the anatomy of animals and plants. The amount we’ve learnt about biology from this practice is unparalleled and remains a practice in the modern world; from postmortems to classroom dissection, there’s no better way of learning what’s under the skin of an organism.

The first known instances of dissection were carried out by the ancient Greeks around 350-400BC. While human dissection was considered taboo and banned under Roman law, many Greek physicians dissected and studied animal cadavers.

Around the same time in India, records show interest in the inner workings of the body; although it was unclear if they performed dissection on bodies, they marked the beginning of what became large medical advancements around 700-800AD where the practice flourished under Aryan rule.

Enquiries into the inner workings of the body were also made across other parts of the world; from physicians in the Islamic countries dissecting bodies, to the practice of sky burial in ancient Tibet, to Christian Europe from around the 13th century onwards. Today, while still controversial in many parts of the world, dissection is considered a standard practice in the fields of pathology and forensic medicine.

The practice in education today

In many classrooms across the world, dissection is a popular activity and serves as an introduction to the practice that brought about many medical advancements. While GCSE-level students normally dissect small animals such as a frog or rat, or parts of larger animals such as a pig’s heart, cow’s liver or sheep’s lung, dissection of human cadavers is typically carried out in higher education medical studies.

The advantages of having students carry out dissection include:

To get started with dissection there are certain pieces of equipment you will need. These generally include:

Here at Edulab, we sell all of this equipment in a handy either individually or as part of a set. They are all available to view here: www.edulab.com/cat/biology-1/dissection-1.