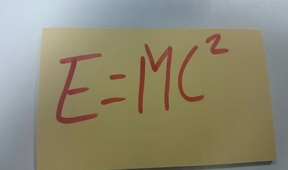 Albert Einstein is undeniably one of the most iconic scientific figures to have ever lived, earning himself a special place in both the scientific community and popular culture. He is, arguably, the most famous scientist of the 20th century. Here we take a quick look at the life and achievements of this gifted scientist who revolutionised the world of physics.

Albert Einstein was born in Germany on the 14th of March 1879, and from a young age displayed a flair for mathematics and physics. He was to relocate several times during his early years, moving to Italy and later Switzerland. Interestingly, Einstein originally trained to be a teacher in physics and mathematics, gaining his diploma in 1901. However, unable to find a teaching post, Einstein eventually accepted a position in a patent office as an assistant examiner, at the Federal Office for Intellectual Property in Bern, Switzerland.

It was here, in Bern, that Einstein established a small group that met to discuss science and philosophy, including the ideas of those such as the renowned philosopher David Hume. The group gave themselves the rather tongue in cheek name The Olympia Academy.

Einstein also studied at the Institute of Technology in Zurich and was granted his doctorate in 1905. It was during this same year, sometimes referred to as his “miracle year”, that Einstein published a number of groundbreaking scientific papers that would revolutionise the scientific community, and bring Einstein to the attention of the academic world. For example, in one of these papers he outlined his famous equation relating to mass and energy: E = MC2 . According to this equation, tiny particulars of matter can be converted into a huge amount of energy, a foreshadowing of the later development of nuclear power.

It was not long before people began to notice the brilliance and importance of Einstein’s work and his ideas began to gain recognition. In 1909 he was awarded the position of Associate Professor of Theoretical Physics at the University of Zurich, among a number of other increasingly prestigious positions that would follow in later years. Furthermore, in 1921, Einstein was awarded the Nobel Prize for physics for his services to the field of theoretical physics and in particular for his discovery of the law of the photoelectric effect.

With the growing political situation in Germany, occasioned by the rise of the Nazi party, Einstein faced increasing difficulties as both he and his work became a target. In 1932 he made the decision to leave Germany, never to return, and emigrated to the USA. Einstein spent the rest of his career in the US, attempting to create a unified field theory that would describe the forces of nature.

Einstein made a number of important contributions to the field of theoretical physics; a branch of physics that uses mathematical models to describe and explain certain aspects of nature. He is most famous for his theories of relativity which forever changed the field of physics. It was during 1915 that Einstein developed the theory he considered his masterpiece, namely his general theory of relativity.  According to this landmark theory, what we recognize as the force of gravity actually arises due to the curvature of time and space. For example, whilst it might appear as though the Earth is being pulled towards the Sun by the force of gravity, this is actually the result of the geometry of space-time around the Sun, which effectively tells the Earth how to move. The theory has far reaching consequences, for example not only can it explain the motion of planets it can also potentially describe both the history, and expansion, of our universe.

Einstein is also famous for his rather inspiring and witty quotes which showcase the genius of this legendary scientific figure, some of his best quotes include :

“I believe in intuition and inspiration. Imagination is more important than knowledge. For knowledge is limited, whereas imagination embraces the entire world, stimulating progress, giving birth to evolution. It is, strictly speaking, a real factor in scientific research.”

“Two things are infinite: the universe and human stupidity; and I’m not sure about the universe.”

“A person who never made a mistake never tried anything new.”

Without the genius of Albert Einstein many of the secrets if our world and universe wouldn’t have been discovered. Here at Edulab we have an amazing selection of scientific laboratory supplies to meet your requirements, so you can make some great discoveries of your own. For more information about our range of products and services please don’t hesitate to contact us on 01366 385777 and one our friendly team will be happy to help you with your enquiries.