A Look at the Large Hadron Collider 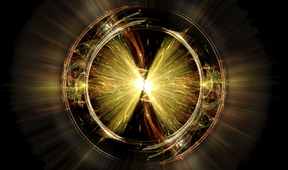 What is the Large Hadron Collider?

The Large Hadron Collider (LHC) is a large, powerful particle accelerator based at the CERN laboratory near Geneva, Switzerland.

The LHC is designed to allow scientists to replicate the conditions that existed within a billionth of a second after the ‘Big Bang’. This is done by colliding beams of high-energy protons (or ions) at immense speeds that have been measured to be close to the speed of light.

The Large Hadron Collider weighs more than 38,000 tonnes and runs for 16.5 miles in a circular route.

The Collider is situated approximately 100 metres below the surface, and particles are propelled at speeds of around 11,000 circuits per second.

The total amount of money to build the LHC was around £3.74 billion, the cost of which was shared mainly by CERN’s 20 member states. The building process involved the participation of 111 nations, who all contributed to the design, testing, construction and finalisation of the collider.

On 4th July 2012, an announcement was made to confirm that those at CERN’s Large Hadron Collider had observed a new particle, which was consistent with the Higgs boson predicted by the Standard Model.

The boson earned the nickname the ‘God particle’ and symbolised a highly significant scientific discovery in human history. The discovery of the Higgs boson, as well as earning Francois Englert and Peter Higgs the 2013 Nobel Prize in Physics, allows scientists to learn far more about our universe than we ever thought was possible, making the Large Hadron Collider one of the most important inventions ever made.

At Edulab, we take immense interest in all scientific feats, including yours. If you require high-quality chemistry equipment, we can provide you with everything you need. For more information, contact us today by calling 01366 385777.