5 Clean Air Inventions You Need to Know About 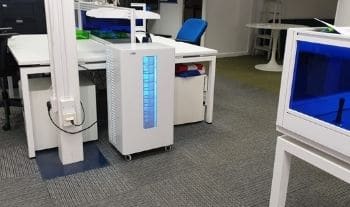 National Clean Air Month 2021 came to an end in May, and the subject of air pollution in the UK is more prevalent than ever before. Throughout May 2021, everyone has had the chance to educate themselves on the consequences of poor air quality and celebrate some of the impressive improvements that have been made towards cleaner air all across the planet.

The World Health Organisation has revealed that air pollution kills roughly seven million people every year worldwide. 9 out of 10 people are regularly breathing air which exceeds the guideline limits and contains very high pollutant levels. In fact, the Court of Justice of the EU, or CJEU, recently ruled that the United Kingdom has ‘systematically and persistently’ broken the legal limits for toxic air pollution over the last ten years. The problem lays heavily with diesel vehicles which produce high levels of nitrogen dioxide, although there are many factors contributing to air pollution in the UK and across the planet.

City air is a major contributor to air pollution in the UK, and 75% of urban areas in the country still have illegally high levels. However, production of meat and factory farming are another major cause for concern. Nitrogen fertiliser used in growing crops produces a huge amount of nitrous oxide, and manure emits methane, CO2, ammonia and many other pollutants which affect the air quality. A new study has revealed that the meat industry and agriculture has led to an estimated 17,900 air quality-related deaths in the US every year.

The Coronavirus pandemic has only further highlighted the need for cleaner, more purified air across the world. Many individuals and businesses are turning to air purifiers and air sterilisers in a bid to improve the quality of the air around them. Caroline Russel of the London Assembly Environment Committee said “The need to stay home, wear a mask and keep two metres away from others is all so that we don’t breathe in or pass on a virus that could potentially kill us. Yet the air we breathe when we are on our way to work, school, shops or work offices, is filthy and health harming.”

Technology has been imperative so far in helping battle the air pollution war, as well as harmful bacteria and virus prevention, and this National Air Month as have been on the lookout for the best clean air inventions that everyone should know about.

Cycling is already one of the greenest forms of transport, but the GoRolloe smart bikes are taking this one step further. The average bike emits roughly 21g of CO2 for every kilometre travelled, which is not a large number compared with other vehicles, but GoRolloe makes that even greener. This impressive invention by industrial design graduate, Kristen Tapping, has transformed standard bike wheels into an on-the-go air purifier. As you ride, the wheels suck in polluted air, filter it, and release clean air back into the environment. This phenomenal invention makes for a truly carbon-negative mode of transport, and also goes some way to battling the pollution caused by other vehicles on the road.

Last year, Airbus unveiled three unique concepts for zero-emission aeroplanes. Each concept uses hydrogen as the primary source of power but work in slightly different ways and explore different technologies. Using hydrogen for aviation is set to be the solution for the industry to meet the climate-neutral targets. These aircraft involve using liquid hydrogen through combustion to power the travel, and while they could be ideal for short haul flights, the technology is not quite ready for long haul journeys.

Scientists across the world have been working on the concept of robotic bees for some time now. Technology has been developed which works as a drone to transport pollen from flower to flower, just as a bee would do. The tiny devices are coated in horsehair and sticky gel, which works to pick up pollen grains from one flower and rub them off on the next, perfect for cross pollination. Without bees, a huge 85% of plant series across the planet would be in danger, but these robotic bees could be the perfect solution.

We all know that trees are critical to clean air, and one of the biggest dilemmas is that we can’t grow trees in very dry areas, such as deserts. The Groasis Waterboxx is an innovative invention designed to help trees grow in dry locations. This impressive bucket works by collecting minimal rainwater and night-time condensation and storing it for the growing trees. Every day, a small amount of water is released into the ground next to the new tree, and the water is protected from being evaporated by the high heats.

A brand-new technology has been designed to capture greenhouse gas in the atmosphere and use it to manufacture plastics. This is a powerful alternative to making plastics from fossil fuels and could be key to helping reduce air pollution all across the planet. It works by capturing methane emissions from water treatment plants, dairy farms and landfill. The gas is then combined with air and converted into a liquid polymer, which is then turned into plastic pellets.